WILPF and the United Nations

Addressing issues through a gendered lens, we bring women together, working locally and globally to:

WILPF affirms that peace and security efforts are more sustainable when women are equal partners in the prevention of violent conflict, the delivery of relief and recovery efforts and in the forging of lasting peace.

Our focus for action is:

I caught the vision of WILPF foremothers. It’s about not just ending war but creating a world in which war would not occur. This is the meaning of building peace. This is the passion of the women of WILPF.

The WILPF Australian Section works on the ground in Australia. With our focus at the grassroots level, we are active in:

Our activities are primarily organised around campaigns and projects in action (plus there are a number in development).

Members also meet online in groups and around particular actions and campaigns to connect, expand their network and contribute to the strategic goal and action of their choice – irrespective of location.

Currently we have branches in five states and territories:

I would urge us all to encourage our daughters and granddaughters and their friends to join WILPF to continue the great tradition of women working for peace.
Margaret Reynolds, WILPF Tasmania Branch

Supporting members
We support WILPF members to build their knowledge as well as networking skills, organisational, communication and creative skill sets across a range of areas.

I appreciate the flexibility WILPF offers in networking. I’m living in Perth, WA – and I’m an active member of the WILPF campaign initiated by Qld branch: the ICAN Cities Appeal, aimed at making our cities and our planet nuclear target free.
Glenys Davies

Leadership Opportunities
Providing opportunities for and building leadership capacity is an important component of the organisation’s process. WILPF Australia’s structure offers a variety of volunteer leadership opportunities to its members.

The Young WILPF (YWILPF) Network is a working part of the WILPF Australia family. YWILPF provides a space for those 35 years and under to organise and advance WILPF’s goals of gender equality, peace and disarmament within the younger generation.

Pretty much every turn of my career has seen tough and tenacious WILPF and Young WILPF women leading the way, speaking truth to power, encouraging me to find mine. 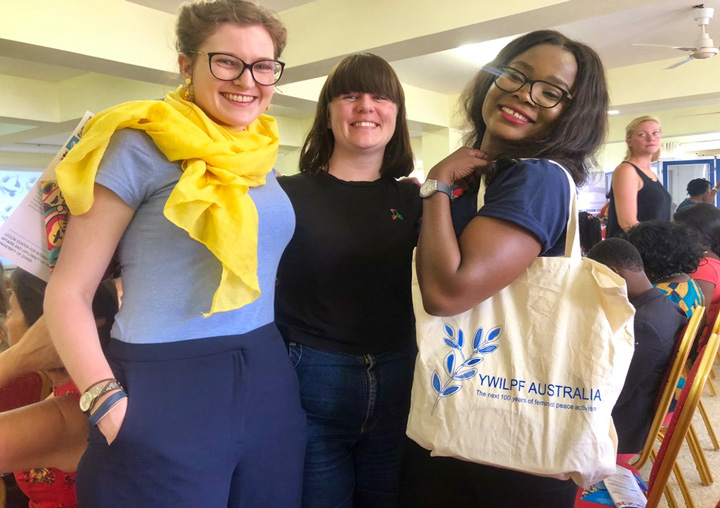 WILPF actively connects with all levels of government.

We work collaboratively with other volunteer peace organisations across Australia.

Our Section’s strength lies in our linkages between local, national and international participation and activism.

WILPF is a membership-led organisation governed by a Constitution and By-Laws. The WILPF Australia Section has two organs namely the Australian Triennial Conference and the Australian Board.

Between Triennial Conferences, the WILPF Australia Board is responsible for the overall governance of the Australian Section. Our National Board meets online 6 times per year, with an in-person meeting held approximately every 18 months.

The Board is composed of a President, Vice-President, Secretary and Treasurer, and a Branch Delegate from each of the five branches, with any national member who is an elected member of the International Board included ex officio as a member of the Australian Board.

For 2021-24 the members of the WILPF Australia Board are:

WILPF and The United Nations

In 1948, WILPF became one of the first NGOs at the international level – and the first women’s peace organisation – to be granted consultative status with the United Nations Economic and Social Council (ECOSOC), a status that gives us access to all of the UN bodies that are open to NGOs, including the General Assembly and the Human Rights Council.

Consultative Status is a formal relationship between non-governmental organizations and the United Nations that allows NGOs to participate in the work of the UN. This status is essential for WILPF’s advocacy in that it enables access to official meetings with decision-makers at the highest international level.

By delivering statements, participating in negotiations, holding side events and participating in debates, interactive dialogues and panel discussions, WILPF is able to highlight the importance of issues and give voice to activists from affected communities around the world.

Having the ECOSOC consultative status also means that the quality of WILPF’s work is open to review by the UN to ensure that we live up to the standard required to maintain the access we have.

Over many decades WILPF has utilised this status to lobby the UN. In 2000, WILPF established two key international programs – Reaching Critical Will (RCW) and Women. Peace & Security (PeaceWomen) to strengthen its advocacy around disarmament and to promote feminist perspectives on peace and security.

Internationally, in Australia and in other Sections across the world, WILPF continues to monitor implementation and lobby governments to fulfil their commitments to UNSCR1325 and subsequent Women, Peace and Security resolutions.

When you join WILPF Australia, you automatically become a member of WILPF International, and therefore part of a global WILPF sisterhood.

WILPF Australia’s strength lies in our linkages between international, national and local participation and activism.

Worldwide
There are close to fifty WILPF National Sections and National Groups in as many countries, with many of these Sections and groups in countries experiencing conflict.

WILPF Australia is part of the Asia Pacific Region, along with WILPF Aotearoa/New Zealand, WILPF Polynesia, and WILPF Japan.

Governance
The international program is established by our highest decision-making body, the WILPF World Congress. This comprises representatives from all sections, convening approximately every three years for members to discuss the work of WILPF and set the policies and direction of WILPF.

WILPF’s Secretary-General is human rights lawyer Madeleine Rees OBE, who before joining WILPF in 2010 served as the Head of Womens Rights and Gender Unit for the Office of the High Commissioner for Human Rights.

WILPF has created and continues to resource two powerful and highly regarded programs and resources to promote disarmament and demilitarisation and women, peace, and security at the United Nations, through WILPF’s national sections, and to support everyone in the world working for a feminist peace.

PeaceWomen also provides recognised leadership in the feminist movement and the peace movement on issues of peace and security.

A network of peace women, passionate about lasting peace and women's role in achieving it. Since 1915.

What can one woman do to bring about a sustainable peace in the world?

We acknowledge the Traditional Owners of country throughout Australia and recognise their continuing connection to land, waters and community.
We pay our respects to those past, present and future.