For more than 100 years, the Women’s International League for Peace and Freedom (WILPF) has been working around the world to achieve real lasting peace and freedom.

WILPF is the oldest international women’s peace organisation in the world.

How and why did WILPF start?

On 28 April 1915, during World War I, a group of 1,136 women from warring and neutral nations gathered in The Hague, the Netherlands, to discuss how to end the war and ensure permanent peace. The meeting ended with the foundation of the Women’s International League for Peace and Freedom.

The organisers of the congress were prominent suffragists who saw the link between their struggle for women’s right and the struggle for peace.

Women from WILPF challenged the terms of the Treaty of Versailles, stating that the terms “seriously violate[d] the principles upon which a just and lasting peace can be secured.” They suggested amendments to the terms and telegraphed these amended terms to the winning countries.

They believed that full and equal participation of women in the decision-making processes was essential for achieving sustainable peace.

And they were right.

Australian women’s peace groups affiliated with the international body and travelled to the second women’s peace conference in 1919. By 1920, WILPF Australia was established, and branches had been established in New South Wales, Tasmania, Victoria and Queensland.

Today WILPF is still advocating that women lead the way to change, and that peace is only possible when more women with feminist approaches hold more positions of power, decision making, responsibility, and influence.

A pictorial summary of WILPF Australia’s proud history was collated for the Centenary.

Here are a few moments in time.

Some of the attendees at the WILPF regional conference in Hawaii.

1928 The first WILPF Regional Conference was held in Hawaii.

WILPF Australia continues to build a strong and significant relationship with women of other Pacific countries – far in advance of anything attempted by government. 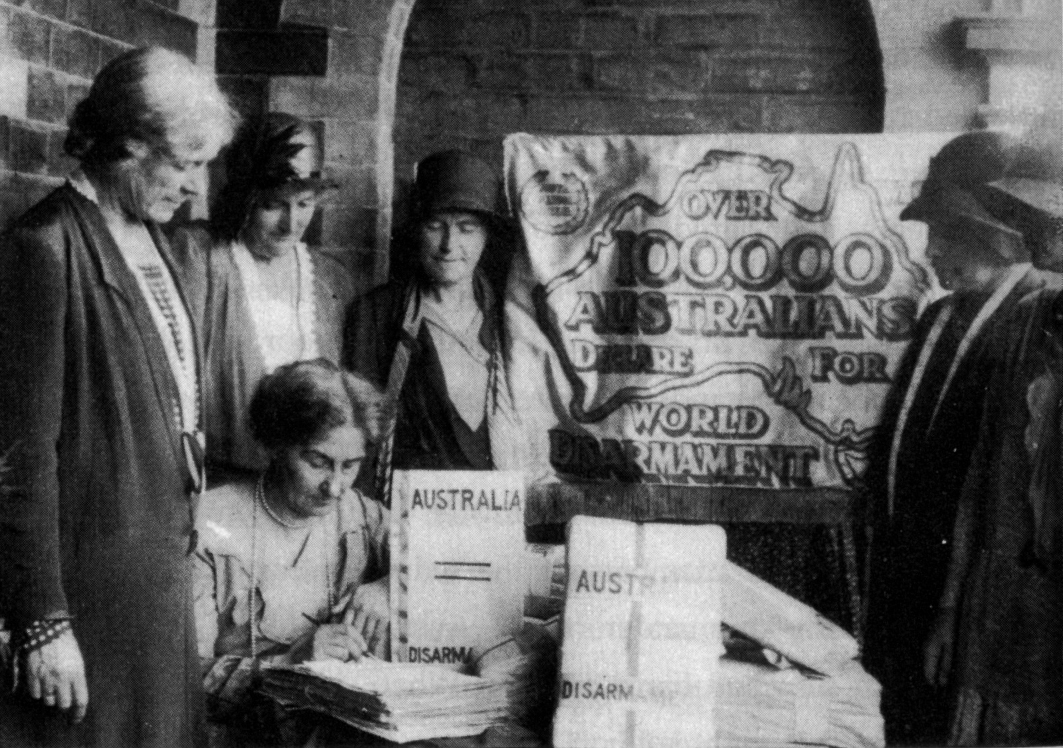 1931 WILPF Australia collects 117,400 signatures for a worldwide disarmament declaration initiated by WILPF International. Worldwide, of the 8 million signatures gathered, 6 million were gathered by WILPF women. Australia’s contribution was the highest per head of population in the world. 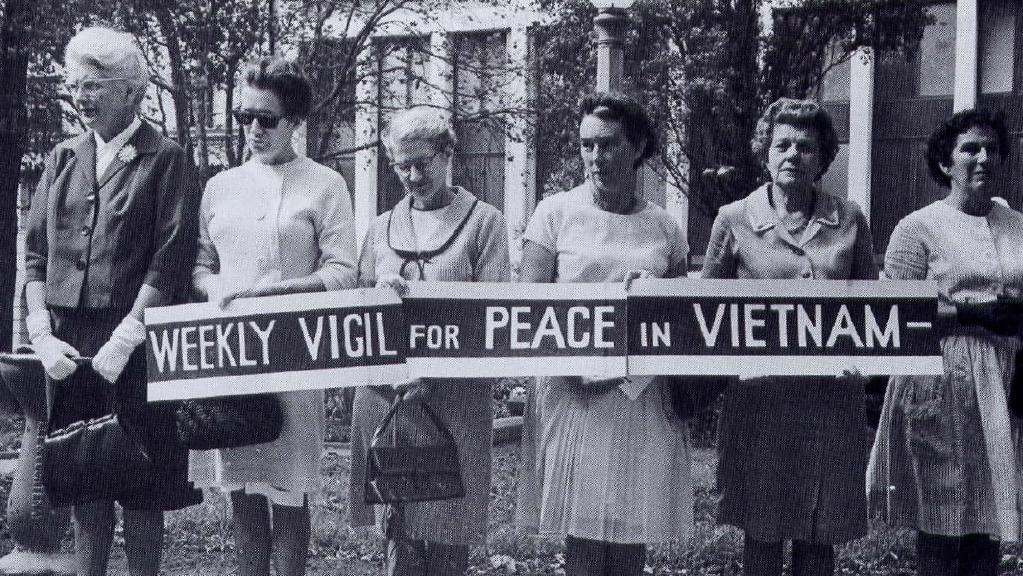 WILPF and Save Our Sons silent vigil in Sydney.

1960s WILPF works with Save Our Sons and other organisations to support draft resisters and protest the war on Vietnam.

A few of WILPF and WILPF Australia’s recent activities include:

Global Women’s March to Ban the Bomb. In June 2017, WILPF Australia branches around the country worked with WILPF International (the official host), in conjunction with the International Campaign to Abolish Nuclear Weapons (ICAN), and other peace and environmental communities. Their brief: to call on all countries at the United Nations General Assembly to adopt the Treaty on the Prohibition of Nuclear Weapons.

The massive global mobilisation sent a clear message to those meeting at the UN.

Internationally, WILPF, through our disarmament programme, Reaching Critical Will, also participated in the negotiations that extended into the UN meeting rooms.

This landmark global agreement was adopted by 122 States and passed on 7 July 2017. Currently Australia is not a signatory to this Treaty.

On this day the nuclear disarmament terrain was indelibly changed.

The Nobel Peace Prize was awarded to the International Campaign to Abolish Nuclear Weapons (ICAN), of which WILPF is an active member, in recognition of our collective work to achieve the Treaty.

Community Engagement Roundtables throughout Australia, and a Policy Dialogue with Government on the first National Action Plan (NAP). WILPF partnered with a range of organisations in the Australian Civil Society Coalition for Women, Peace and Security to conduct the consultations and dialogue, and has been actively engaged in civil society representation in the NAP, and in advocating for the reshaping of the peace and security dialogue, as well as policy and practice in Australia and the Asia and the Pacific region, away from an increasingly militarised and securitised approach towards a transformative women, peace and security agenda.

Working Together for Equality: Australia NGO Caucus. Beijing+25 Review 2019
WILPF contributed significantly. The report was shared with the Australian Government and partner NGOs; this also provides background information for the CSW64 global review of the Beijing Platform for Action.

WILPF Australia refines its focus in an updated Strategic Plan that scopes the future direction and charts the course of action, involvement and revitalised opportunity for participation and contribution within the national organisation, and cooperation with other peace organisations.

A network of peace women, passionate about lasting peace and women's role in achieving it. Since 1915.

What can one woman do to bring about a sustainable peace in the world?

We acknowledge the Traditional Owners of country throughout Australia and recognise their continuing connection to land, waters and community.
We pay our respects to those past, present and future.