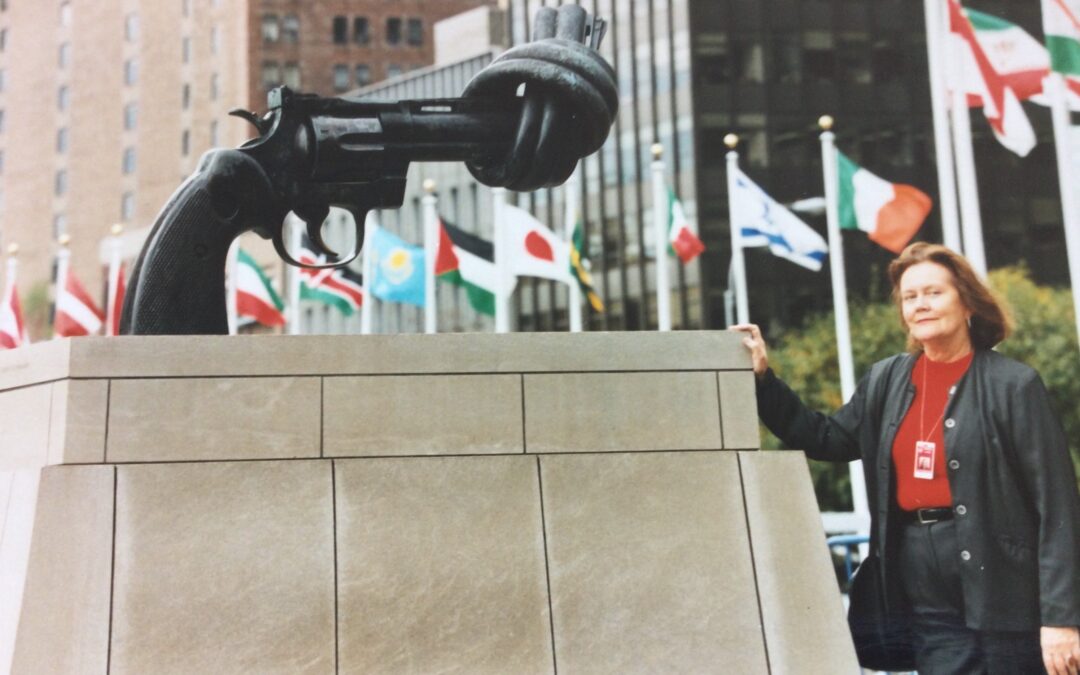 WILPF member and former Senator Margaret Reynolds honours the 2020 centenary of WILPF Tasmania – and shares her own story of working for peace.

Congratulations to you all on this very special occasion as we celebrate 100 years of Tasmanian women campaigning for peace. Any organisation which works over so many years deserves praise, but the Women’s International League for Peace and Freedom has persisted in its advocacy against a background of war, conflict and terrorism in political environments where the majority chose revenge and aggression rather than rational dialogue to find peace.

You and so many others who have worked consistently over these ten decades have refused to be persuaded that war is the solution. You have created a strong backbone of resistance to various forms of propaganda that try to convince communities that a ‘just” war, or a war against “evil”, will bring lasting peace. Thank you for your strong commitment to conflict resolution and today we especially remember our friends whose lives were similarly devoted to the goals of WILPF.

Today I wanted to give you just a glimpse of my own personal journey working for peace over more than fifty years. Then I would like to offer two ways in which I believe we should strive for peaceful reform both locally here in Tasmania and nationally.

I was politicised by Australia’s entry into the Vietnam war in 1965 when our national government imposed conscription of 19-year-old men as soldiers for that war.

I was a young mum with a baby son and could not imagine how I would feel if he were ever to be conscripted. I read about Save our Sons, a newly formed organisation established in Melbourne which aimed to overturn conscription policy and support conscientious objectors and others actively working against this arbitrary call-up.

At the time I had just moved with my husband to Townsville, which had a newly established military base including both the army and air force, strategically located in the north of Australia.

I decided to set up a local branch of Save our Sons and placed an advertisement in the local newspaper inviting women concerned about conscription to attend a meeting at our home. I imagined our living room would be crowded but only four women joined me to start planning our local campaign.

I was nominated the spokeswoman. I soon found that local journalists were eager to interview me. The response was amazing: we lost friends who thought we were troublemakers or even communists! Meanwhile one of my husband’s academic colleagues said, “Reynolds should control his wife as she is giving the university a bad name”!

This introduction to political activism in remote North Queensland put me on a very steep learning curve.

I learned that in the 1960s women were defined by their husband’s career and it was unacceptable for a young married woman to speak out in public debate. I began to read about foreign policy and national politics and most importantly joined the Townsville Peace Movement. This introduced me to the Australian Labor Party and the trade union movement. Over several years, our numbers increased and many more people began questioning government policy. I acquired skills in campaigning and organising protest rallies, even negotiating with local police to conduct random opinion polling and petition-signing in the main street. We delivered farewell gift boxes to departing troops leaving the local Royal Australian Airforce base, though in retrospect I imagine only the sweets and chocolates were welcomed and our carefully handwritten peace messages would have been discarded!

By 1972 I was celebrating the election of Labor Prime Minister Gough Whitlam who announced that Australian troops were to be withdrawn from Vietnam. Conscription, which had so divided the nation, has not been re-introduced since.

I continued working with the peace movement during the 1970s when its focus was the presence of U.S military bases in Australia. Working with People for Nuclear Disarmament, we opposed visits of nuclear war ships and American B52 bombers, and campaigned against uranium mining . I was elected to the Townsville City Council in 1979 and we declared the city nuclear-free, raising the ire of the French owned mining company exploring for uranium in nearby Charters Towers. These activities were closely scrutinised by Queensland Special Branch and no doubt information was also collected by the Australian Secret Intelligence Office.

In 1983 I was elected to the Australian Senate where I was introduced to the Women’s International League for Peace and Freedom by a colleague Senator Pat Giles from Western Australia. I joined then and have remained a member of the Queensland and then the Tasmanian branch.

In 1984, Labor women parliamentarians supported the Women’s Peace Camp set up outside Old Parliament House in Canberra. Women were protesting against the influence of American defence policy on Australia, and particularly the joint secret military activities at Pine Gap. We invited these protestors into Parliament House to have hot showers and warm food ,despite some of the vocal criticism of certain opposition “sisters”.

At the end of that year, my family was travelling overseas, where I had planned to visit the women peace activists opposed to the launch of Cruise Missiles, who were camped at Greenham Common adjacent to the Berkshire military base.  The women from the Pine Gap Camp arranged for me to take a Peace Cake from Australia in solidarity with the women of Greenham Common. It was large fruit cake, well wrapped and carried in my hand luggage. When I finally took it to be cut, as we sat around the fire at the Women’s Peace Camp, I discovered that several heartfelt peace messages had been included. Wrapped in alfoil, they had survived the journey from the desert of Central Australia to the snowclad English forest. Fortunately, my travel at this time preceded electronic scrutiny of hand luggage so I didn’t have to answer any awkward questions about the secret greetings hidden inside the Peace Cake!

As a parliamentarian for sixteen years, I was able to participate in a range of foreign policy debates that focussed on peacebuilding. During the years I was in government, the Labor Government appointed me as the first Minister for Disarmament and I played a major role negotiating for the development of an International Chemical Weapons  Convention. I joined some of my colleagues in campaigning against Australia’s involvement in the US MX Missile Defence Program, and Australia’s promotion of a Nuclear Free Pacific. In 1989 as Minister for the Status of Women in the Hawke Labor Government, I welcomed 300 delegates to Sydney where they were attending WILPF’s International Congress, Women: Building a Common and Secure Future.

In 1991 when the Prime Minister committed Australia to the U.S Gulf War, I was one of nine government representatives who opposed this decision, releasing a public statement urging the United Nations to focus on the withdrawal of Iraqi troops from Kuwait and advocating demilitarisation of the Middle East. 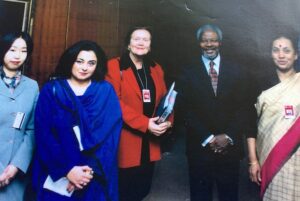 Parliamentarians for Global Action from Japan, Pakistan, Australia and India advocating a Women’s Peace Delegation to Iraq in 1992.

During my last six years in the parliament, I represented Australia in an international organisation, “Parliamentarians for Global Action,” which worked for a nuclear test ban, non-proliferation and United Nations peacekeeping. We promoted an active role for women in leading conflict resolution talks between nations, urging the then U.N. Secretary-General Kofi Annan to send a Women’s Peace Delegation to Iraq. Sadly it didn’t happen, but the following Iraq and Afghanistan wars continue to demonstrate that male-led wars fail to resolve conflict. 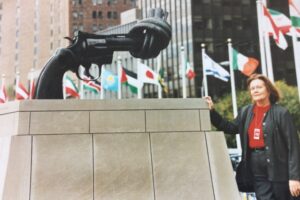 Australia’s Representative to the United Nations General Assembly in 1997, Margaret stands outside the UN with the UN’s disabled gun sculpture.

Just prior to retiring from parliament I  was involved in trying to prevent a major arms exhibition, AIDEX, being held in Canberra. Unfortunately, we were unsuccessful and one of the legacies of that event is an arms industry which has a very cosy relationship with national government departments as well as offering considerable largesse to the Australian War Memorial.

There are two recommendations  I would like to make as a way to mark WILPF Tasmania’s Centenary.

The first is a local initiative to actively recognise Tasmania’s own Black War with the First Nations of this island in the 1800s. The second advocates national reform to ensure all parliamentarians are involved in decision making about the country’s involvement in war.

Most Tasmanians do not know their own history … they may have vague ideas about Van Diemen’s Land being a British penal colony, and that the original occupants were driven from their traditional country. But it is time we engaged in truth-telling about those First Nations heroes who battled over several years to defeat the invaders. Tasmanians need to understand how their state began and how this history continues to influence the way our society has developed. That is the best way to encourage reconciliation and respect for all Tasmanians.

Australia has recently been shamed by revelations of war crimes committed by some of our soldiers in Afghanistan in the last decade. The debate that has erupted demands community discussion about the responsibility of soldiers, their military leaders and governments which send young Australians into war zones.

As a nation we have a history of being one of the first countries to volunteer our troops for wars that are distant from Australia, and among people whose cultures we do not understand.  Why do we believe we are so essential in fighting in the wars of other nations? When will we become independent and commit only to peacekeeping and humanitarian roles? When will we insist that any decision that Australia be involved in war first be debated and voted for in the national parliament?

Australia is proud of its history of warfare yet the frontier wars with Australia’s indigenous peoples is the one area of conflict that successive political leaders refuse to acknowledge.

Members of the Women’s International League for Peace and Freedom are well placed to remind our community that it is time for truth-telling and reform in the interests of a more peaceful Australia.

Margaret Reynolds joined WILPF in 1983 when she was elected to the Australian Senate. Throughout her Parliamentary career she campaigned on a range of peace and security issues. Margaret represented Australia at the United Nations at the General Assembly in 1997 as well as several  UN conferences where she worked with WILPF in Geneva and New York.