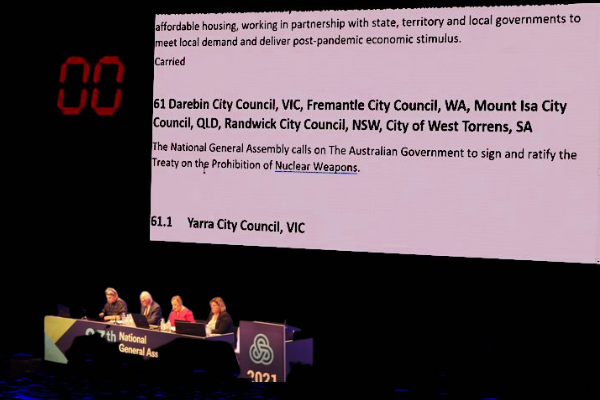 At its National General Assembly in Canberra [on 21 June 2021] the Australian Local Government Association unanimously passed a motion calling on Australia to sign and ratify the Treaty on the Prohibition of Nuclear Weapons.
The motion was moved by Darebin City Council (VIC) and seconded by the City of Ryde (NSW). Fremantle (WA), Mt Isa (QLD), Randwick (NSW), Byron Shire (NSW), City of West Torrens (WA), Inner West (NSW), Newcastle (NSW) and the City of Yarra (VIC) also backed it ahead of the conference.

The push for the national body to endorse the Treaty comes after 35 Australian councils have publicly declared their support for it, along with over 400 cities worldwide. ALGA represents the 537 councils across Australia.

The Treaty is the first to comprehensively outlaw the production, stockpiling, transfer, hosting, use, threat of use of nuclear weapons, as well as assistance with any of the prohibited acts. With 86 signatories and 54 states parties currently, the Treaty entered into force in January this year.

Australia has not yet signed or ratified the agreement, although the Australian Labor Party has committed in policy to do so in government.

“Fantastic how many councils are on board”

Cr Louise Steer of Inner West Council said “It’s fantastic how many councils are on board with the nuclear ban treaty and now its national local government policy. In only a few years, ICAN has changed the way people think about nuclear weapons.”
ICAN campaigner Jemila Rushton said “By endorsing the Treaty, the voice of local government has made a powerful contribution to the push for Australia to join the ban, a critical step towards a nuclear weapon-free world.
The Australian Government is currently part of the problem, but the Treaty provides an opportunity for us to become part of the solution, in line with our record of joining the bans on other inhumane and immoral weapons.”
Delene Cuddihy, a member of the Women’s International League for Peace and Freedom, Australia, said “The risk of nuclear weapons use, whether by accident or design, is growing. All levels of government have a responsibility to protect their citizens from this grave threat. We congratulate the members of the ALGA for their courage in passing this motion which will be one more step towards ridding the world of these weapons of mass destruction whose use could end humanity as we know it.”

ICAN was awarded the 2017 Nobel Peace Prize for its role in the achieving the UN Treaty on the Prohibition of Nuclear Weapons.

WILPF is proud to have played a key ICAN partner role since the establishment of the campaign.

Contacts:
ICAN and WILPF representatives are available for comment.

The following 35 councils have declared their support for the Treaty:

If you’re in their electorate area, contact them to thank them for their stance.