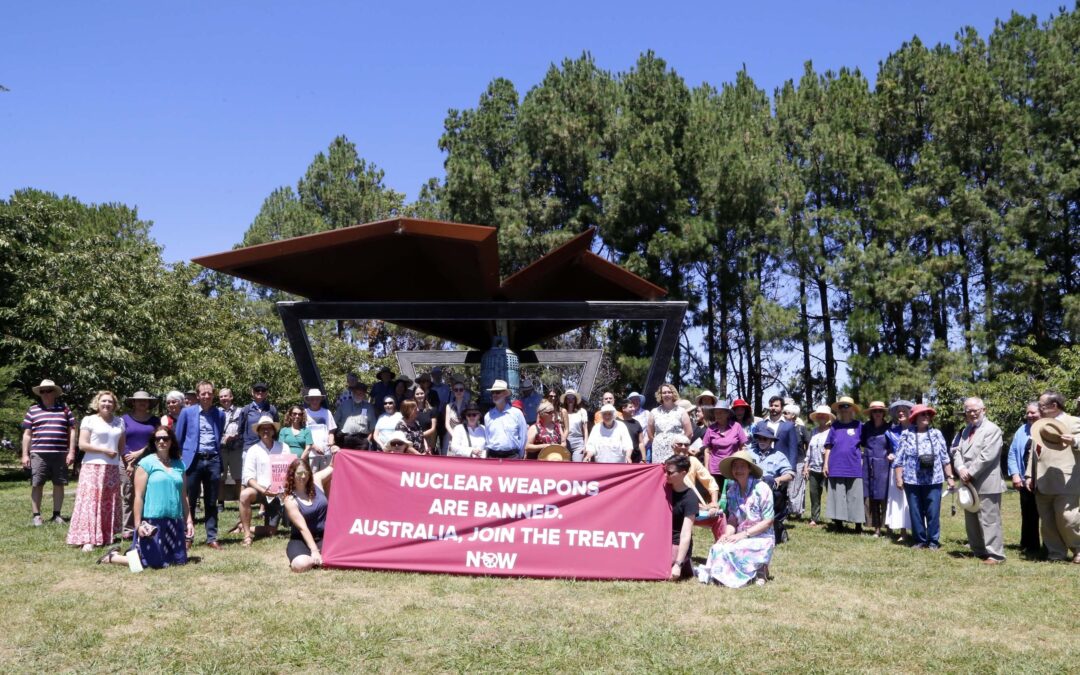 On Saturday 23rd January the Peace Bell rang out across the Nara Peace Park as the Canberra community joined with members of the international diplomatic community and ACT politicians to celebrate the nuclear weapons ban treaty.

The UN Treaty on Prohibition of Nuclear Weapons which legally came into force on Friday 22nd January prohibits all activities associated with nuclear weapons, including their development, testing, production, transfer, possession, use and threat of use.

The celebration was hosted by WILPF – the Women’s International League for Peace and Freedom, MAPW – the Medical Association for Prevention of War and ICAN – the International Campaign to Abolish Nuclear Weapons – each organisation having played a critical role in achieving the Treaty.

Ambassador Vargas-Araya of Costa Rica, a strong advocate for the Treaty, highlighted the importance of Treaty negotiations, and its legal entry-into-force 90 days after receiving its 50th country ratification.

Member of Parliament Alicia Payne and Shane Rattenbury, ACT Attorney General both acknowledged the past horrors of the nuclear bombing of Japan, and the indigenous peoples and survivors of nuclear testing in Australia and the Pacific, speaking about the need to build a sustainable and peaceful future without nuclear weapons.

The celebration marks a historic moment, with the Treaty offering a sign of hope, a move towards peace, a necessary step away from nuclear destruction, and a road map towards the banning of nuclear weapons.

It also marks a great achievement across many generations, many communities, civil society organisations, states and multilateral partners who have worked together to make this ban a reality.

This is also an important moment to encourage all countries to become signatories and for those who have already signed to ratify the Treaty to ban all nuclear weapons.

AND FOR AUSTRALIA IT IS TIME TO STEP UP AND PLAY ITS PART AS A TRUE GLOBAL CITIZEN AND SIGN THE TREATY.