Celebrate the Nuclear Ban Treaty achievement – and call on Australia to join. 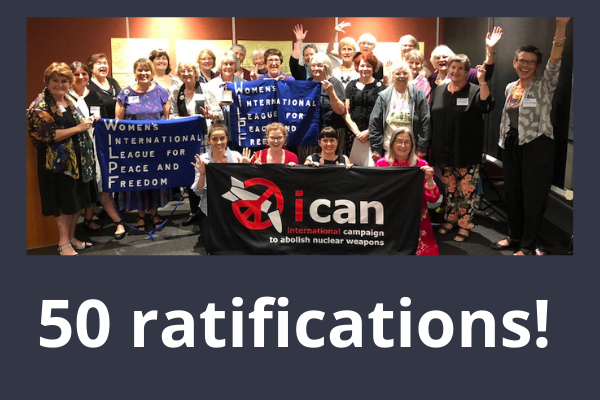 On United Nations Day, 24 October 2020, the Treaty on the Prohibition of Nuclear Weapons (TPNW) reached 50 ratifications by nation states – the number required for the TPNW to enter into force and become international law in 90 days on 22 January 2021.

This achievement has been brought about through the enormous and sustained collective action of States, civil society organisations, diplomats and many others over the last 75 years, and, in the last decade, the shift to focus on the humanitarian impact of nuclear weapons.

WILPF is proud to have contributed to these efforts from earliest days. Now the next phase of work begins: to have all states come on board through ratifying the treaty; and to ensure that the Treaty is implemented as intended. In Australia, we don’t need to look far to see what’s needed.

While nine island states in the Pacific have ratified the TPNW, Australia has not.

It’s time, Australia! Actions you can take to lobby the Australian Government to sign and ratify the Treaty.

WILPF Australia has written the following letter to the Prime Minister, Scott Morrison. Use/adapt the text and send to your local newspaper and politicians.

It should be with pride that Australia now sees at the United Nations the imminent ratification of the Treaty for the Prohibition of Nuclear Weapons (TPNW), otherwise known as the ‘Ban Treaty’.  The role of ICAN (the International Campaign for the Abolition of Nuclear Weapons) that was born here in Australia can be credited with much of the work involved to bring this wonderful achievement about. Their efforts have already been signaled by the awarding of the Nobel Peace Prize in 2017; but here in Australia their work has had limited publicity in the mainstream media or support from our government.

The reasons given by successive Australian governments for opposing the TPNW treaty have been that such a treaty would be divisive, undermine the NPT (Nuclear Proliferation Treaty), and undermine its verification. But the opposite is true.  The TPNW treaty does not undermine the NPT but strengthens efforts to contain and indeed eventually abolish nuclear weapons altogether.  These weapons endanger all Australians, especially given various bases in our country such as Pine Gap making us targets for the nuclear weapons of others.

Instead of aligning with the existing nuclear states, in particular those that are our allies, Australia should sign, ratify, and vigorously lobby others including especially nuclear weapon states to sign and ratify the TPNW.

We as the Australian section of the Women’s International League for Peace and Freedom urge you to back this achievement that has been so much an Australian achievement in the making, and sign and ratify the Treaty for the Prohibition of Nuclear Weapons.

Additional actions you can take: