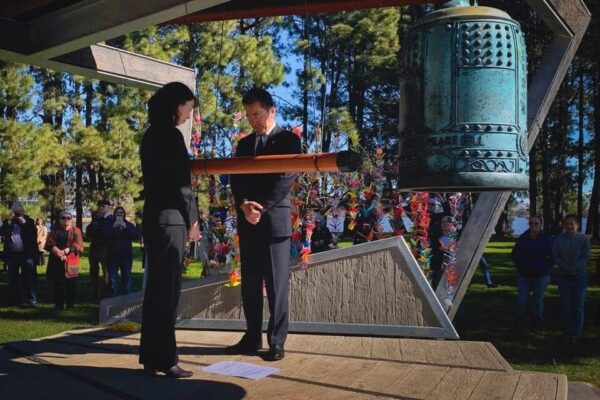 A moving ceremony was held on Saturday 7 August at the Canberra Rotary World Peace Bell to remember Hiroshima and Nagasaki.

Conducted by the Rotaract Clubs of Brindabella and the University of Canberra, the ceremony opened with a song from the Australian Military Women’s Choir as Canberra school children presented paper cranes they had folded for the ceremony.

Those gathered heard from Dr Ludmilla Kwitko from WILPF, Talei Mangioni from ICAN and Libby O’Brien president of the Rotaract Club of Canberra. The final speaker was His Excellency Ambassador for Japan Mr. Shingo Yamagami who also called for a minute’s silence after he and Mrs. Yamagami struck the Peace Bell.

Good morning everyone and thank you for coming out on this crisp Canberra morning to this beautiful Nara Peace Park. I’d like to thank Rotary Canberra for the opportunity to be part of this important commemoration ceremony.

My name is Ludmilla Kwitko. I am here on behalf of the Women’s International League for Peace and Freedom (WILPF) to join with you all in commemorating the nuclear bombings of Hiroshima and Nagasaki, 76 years on from 1945.

I would like to begin by acknowledging the Ngunnawal and Ngambri people as the traditional custodians of the lands and waters where we meet and to pay my respects to elders past, present and emerging. And to acknowledge that these lands have never been ceded. I would also like to pay my respects to all indigenous people who join with us today.

AND to give further acknowledgment to all those killed in Hiroshima and Nagasaki; and to highlight the need to recognise the diversity of voices across communities of victims and survivors – specifically the hibakusha; as well as the indigenous peoples of Australia and the Pacific – all who have suffered under nuclear bombing and testing, including the disproportionate impacts of nuclear weapons on women and girls. And to recognise all those who have been so powerful in their advocacy and humanitarian work for justice to address the catastrophic impact of nuclear weapons.

WILPF has been part of this work for justice, and as a member-based organisation with local, national, and international members, WILPF has worked for over 106 years, (since 1915) to:

Each year, from 6th to 9th August, WILPF recognizes the disastrous effects of the use of atomic bombs on Hiroshima and Nagasaki. This year in the context of the COVID pandemic, we also reflect on how nuclear weapons harm the environment and exacerbate climate change, and the role that WILPF can play to abolish nuclear weapons.

In 1946, WILPF member and then the second woman member of the House of Representatives Doris Blackburn, chaired the first “Ban the Bomb” meeting in Melbourne on the first anniversary of the bombing. The meeting resolved that “all major weapons of mass destruction be outlawed, and that scientific research be free from military and political control”.

More recently, WILPF through its partnership with the International Campaign to Abolish Nuclear Weapons (ICAN) – has been a central part from the beginning, of the initiative to push forward the Treaty on the Prohibition of Nuclear Weapons. This has been as part of a global advocacy effort through WILPF’s disarmament program “Reaching Critical Will” for over a decade, as well as working through the support of its National sections all over the world, including in Australia, and its local Branches including the ACT.

In fact, the last time WILPF ACT was here at the Peace Park with MAPW, ICAN and Rotary was on the 23rd January 2021, a historic occasion to mark and celebrate the “Entry in Force of the Treaty” (made official on 22 January). This was an important moment to celebrate all the efforts to ban nuclear weapons across the globe over the last 76 years; across many generations, many communities, civil society organisations, governments, and multilateral partners – all of whom worked together to make this Ban Treaty a reality – a major achievement!

We are now in a critical moment as the international community moves to consolidate the road map for implementation of the Treaty Ban, which importantly shifts the emphasis of nuclear disarmament to being part of humanitarian action and reinforces the focus on the promotion of international peace and security.

CRITICALLY THIS BEGINS TO MOVE INTERNATIONAL PEACE AND SECURITY FROM A FOCUS ON NUCLEAR WEAPONS, and MILITARISATION, TO A POSITIVE FOCUS ON CONFLICT PREVENTION, DISARMAMENT AND SUSTAINABLE PEACE.

AND FOR WILPF most importantly the Treaty “recognises” that the full and effective participation of both women and men is essential for the promotion and attainment of sustainable peace and security.

This is an important and hopeful step.

Work to be done

AND THERE IS STILL MUCH WORK TO BE DONE. The stakes are high for all of us AND this is everyone’s concern and responsibility, even in the time of COVID, and a growing climate crisis, and especially where governments continue to waste money on nuclear weapons. WE REALLY ARE IN THIS ALL TOGETHER. We need to focus now more than ever, on the effects that nuclear bombing and testing have on the environment and why the Treaty on the Prohibition of Nuclear Weapons is a critical tool for positive change.

This is also an important moment to encourage all countries to become signatories to the Treaty and for those who are already signatories to ratify the Treaty to ban nuclear weapons. AND for Australia it is time to step up and play its part as a TRUE global citizen and sign the Treaty.

Today WILPF joins with everyone in remembering Hiroshima and Nagasaki and makes a commitment to work with you all for sustainable peace and to ensure that in the uncertainty of today’s global climate we never see nuclear bombs used again as in Hiroshima and Nagasaki, and that we see the prohibition of nuclear weapons become to full reality.

Thank you – and in peace – WILPF looks forward to working with you all to move forward to a future of nuclear disarmament and sustainable peace.