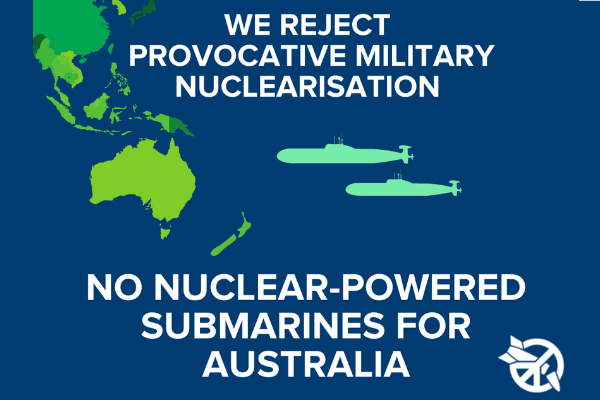 The announcement today that Australia will purchase and manufacture nuclear powered submarines is further evidence of rapid and dangerous militarisation that has not been tested on public opinion. It suggests further adventurism with the United States on yet another overseas mission, which will be very disturbing for many Australian families who already have suffered loss and trauma as a result of government decisions to embroil its citizens in international conflicts.

The Women’s International League of Peace and Freedom, Australian Section (WILPF) has a century long history of advocating for strategic negotiation and regrets the ongoing preoccupation of successive national governments with militarisation. Furthermore, such reliance on the military excludes the people of Australia because there is no consultation nor opportunity for the parliament to debate the risks or benefits of this “behind closed doors “strategy.

WILPF believes it is time that Australians spoke out to demand a detailed and transparent public process to engage our citizens in the implications of such a decision on our national security and relationship with our Asia Pacific neighbours. On the eve of the Glasgow Climate Conference (COP 26), it is also essential the Australian Government explain how its sudden commitment to nuclearization will impact on the environment.

WILPF Australia’s research report “Militarisation in Australia: Normalisation and Mythology” will be officially launched next month to coincide with the United Nations Disarmament Week. It highlights the tangled web of militarisation being spun within Australian society, culture, education, and economy. The report details the alarming extent to which Australian business has been drawn into the military supply chain and the number of global weapons manufacturers (like Lockheed Martin) which have become embedded in our economy.

The Federal Government needs to explain the implications of its arbitrary decision to commit to nuclearisation despite so many Australians having articulated their grave concerns about such a course since the 1970s.