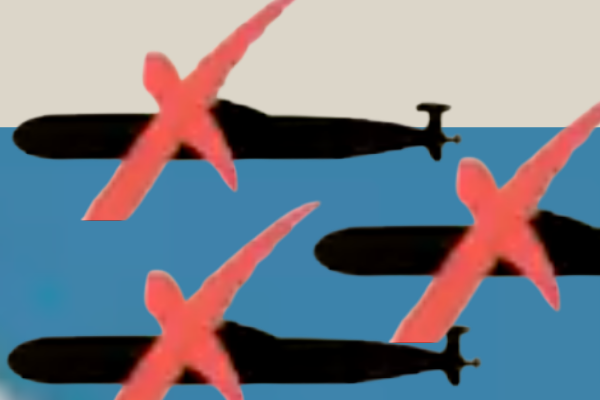 PRIME Minister Scott Morrison’s plan to buy and manufacture nuclear submarines is a shocking and reckless policy, made even more disturbing when viewed through the lens of a broader militarisation of Australian society, culture and economy.

Such a radical departure from Australia’s clear-headed and longstanding nuclear free status without public consultation, parliamentary scrutiny or an electoral mandate is to be condemned.

As we rebuild communities hit by Covid-19 and bolster services, including health, profligate spending of taxpayers’ money, reaching into the hundreds of billions, is even more egregious.

The risk for calamity is obvious. Australian Greens Leader Adam Bandt said it would put “floating Chernobyls” in our cities.

New Zealand’s PM Jacinda Ardern is not risking her citizens, nor waiting for the “champagne over the bow” to confirm they would be banned from NZ waters.

Perhaps more concerning is it demonstrates a dramatic escalation in the broader militarising of Australia.

Research by the Women’s International League for Peace and Freedom, Australian section, reveals a tangled web of militarisation being spun in Australian society, culture and economy.

Since 2010 militarisation has grown significantly, with increasing investments in military budgets, expansion of arms industry and exports, and peaking in 2020 with domestic military operations related to natural disasters, bushfires and the pandemic.

The increased blurring of boundaries between civil, state and military spheres is resulting in a growing reliance on the military to address disasters, fires and pandemics to the detriment of the capability and resilience of civilian responses and communities.

The addition of nuclear powered submarines means we now face an even more sinister threat — a form of “nuclearised militarisation”.

People may be surprised to learn that in 2019 Australia was one of the largest importers of military merchandise in the world, and the government has a strategy to put us in the top 10 of military exporters by the end of the decade.

Has anybody asked us whether this is the “clever country” we wish to become? Do we want to use the skills of our best and brightest, and advanced manufacturing, to build industries designed to save lives, or to take lives?

This is a national debate we have not had, yet we are hurtling headlong into a militarised future.

While government provision of health, housing, education and women’s safety remain underfunded, taxpayer money allocated to the Defence portfolio is surging. The 10-year forecast, out to 2030, was $575 billion, but that is now likely to be revised up again.

The PM will need to give undisclosed additional money to the US for the nuclear technology and pay for the undisclosed cost of scrapping the existing $90 billion contract for conventional submarines with the French.

The Defence Department budget enjoys unrestrained growth, rising by 50 per cent in the past 10 years.

Mr Morrison’s decision to play the nuclear card has some speculating that this is part of a build-up to a “khaki election’’, as he desperately needs to reframe his prime ministership away from his multiple Covid-19 failures to one about “war and security”.

The PM’s announcement heightens the risk by alienating Pacific partners, stoking a regional arms race, and making us a bigger target in US proxy wars.

The militarisation of our economy is dangerous, as we are on a path to economic dependence on an industry designed to surveil, threaten and/or kill people.

Businesses are being drawn into a military supply chain, and global weapons manufacturers such as Lockheed Martin are embedding in our economy via subsidiaries.

A “web” is a fine metaphor for this militarisation because it is being well and truly spun. In 2017-18 Defence spending on advertising and market research peaked at $76.4 million, making it the highest single government department advertising budget for that year.

Those who value peace and diplomacy over reckless, endless wars should tell the PM “No thanks pal”.

Harriet Binet is state president of the Women’s International League for Peace and Freedom. A former Mercury reporter, she has worked as a humanitarian aid worker with Oxfam Great Britain.