WILPF calls for peace in Ukraine 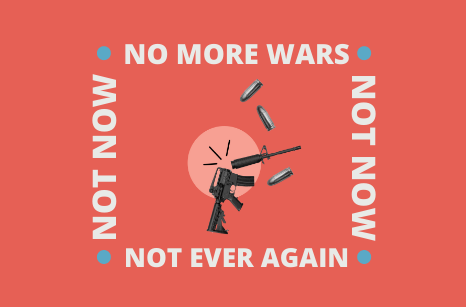 WILPF Australia strongly condemns the Russian invasion of Ukraine and we call for peace and an end to war. No more wars – not now, not ever again.

In our letter to Prime Minister Morrison, WILPF has urged the Australian Government to stand united with the international community in calling for Russia to cease its illegal actions and to stop violating Ukraine’s independence, and to ensure that protection and humanitarian assistance is provided to Ukraine.

As the quickly moving situation develops in Ukraine, we welcome news that Australia will provide medical supplies, financial support to Ukraine, and support a range of visa options for Ukrainians fleeing their country, including an increase in refugee visas. However, we do not support the government’s announcements for Australia providing“non-lethal military equipment” to Ukraine nor funding for lethal aid through NATO, as provision of military equipment risks further exacerbation of the conflict situation.

Specifically, WILPF Australia strongly urges that the Prime Minister to work strongly to ensure that women and girls, particularly women human rights defenders, including those displaced during this conflict, are not left behind.

No more wars – not now, not ever again

WILPF Australia has followed the call of WILPF International in its opposition to war in Ukraine. On 24 February, Madeleine Rees (WILPF Secretary-General) wrote to Fridays for Future International highlighting why the invasion of Ukraine is such a risk to the planet. Ukraine has 15 nuclear power stations that are vulnerable to deliberate or accidental destruction or meltdowns due to loss of power through cyber-attacks, which would have devastating impacts for people and planet.

This statement built on her open letter to the UN Security Council (28 January) urging the Security Council to bring together the parties for mediation and peaceful resolution. And on WILPF Europe sections and groups calling on the EU and for European governments to de-escalate conflict in Ukraine.

This did not happen. Despite further urging in mid-February stressing the need for a people-centred peace process, with the equitable and meaningful participation of all those affected, the escalation in Ukraine has meant the rapid deterioration of our human security, at levels reminiscent of those in 1914 – leading to WILPF’s GLOBAL CALL TO ACTION on International Women’s Day 8 March, for no more wars – not now, not ever again.

14 February 2022 – WILPF International Secretariat Call To Action: No more wars! Not now, not ever again!