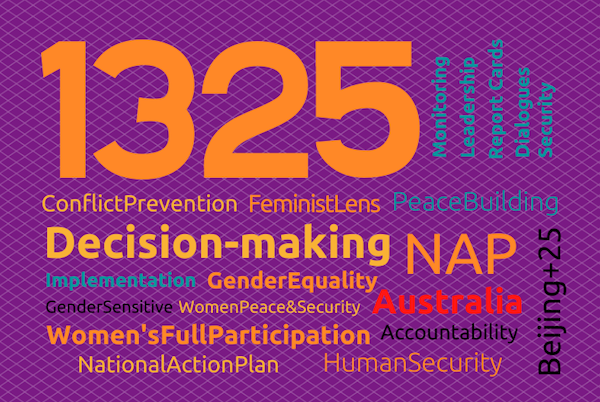 SCR 1325
• stressed the importance of women’s equal and full participation as active agents in peace and security;
• addressed the disproportionate and unique impact of armed conflict on women;
• recognised the under-valued and under-utilized contributions women make to conflict prevention, peacekeeping, conflict resolution, and peacebuilding;
• prioritised the inclusion of gender perspectives at every stage of the peace process; and
• called for the development and implementation of a National Action Plan (NAP) for Women, Peace and Security by all states (countries).

So, twenty years later where are we now? What has been WILPF’s role in the implementation of SCR 1325 in Australia? What do we need to be focusing on?

WILPF Australia’s role
Advocacy: WILPF Australia was a key driver of civil society’s advocacy for the implementation of SCR 1325 and for the development of Australia’s first National Action Plan (NAP) on Women, Peace and Security (2012-2019).

Feminist lens: WILPF Australia, as part of the Australian Civil Society Coalition on Women, Peace and Security, has played an active role in bringing a feminist lens to monitoring the first NAP’s implementation through Annual Civil Society-Government Policy Dialogues and Annual Report Cards. These dialogues have strengthened civil society engagement across the women, peace and security agenda, and contributed to the development of Australia’s second National Action Plan on Women, Peace and Security.

WILPF’s ongoing objective is to reshape the concept of peace and security and to move policy and practice away from an increasingly militarised and securitised approach.

2020 is also the 25th anniversary of the adoption of the Beijing Declaration and Platform for Action,* the most progressive blueprint ever for advancing women’s rights, which took place on 15 September 1995 at the Fourth World Conference on Women: Action for Equality, Development and Peace.

For Australia, 2020 is a critical year as we await the release of Australia’s second National Action Plan on Women Peace and Security which presents an important opportunity to:

WILPF Australia continues to play a critical role in monitoring the progress of Australia’s second National Action Plan on Women Peace and Security, and in working to promote a feminist peace.

Women Leading for Peace and Security is one of the 2 Core Action Areas for WILPF Australia. To find out more click here.

*Find out about the Dialogue Reports produced by the WPS Coalition

(Note – these links take you to other websites)