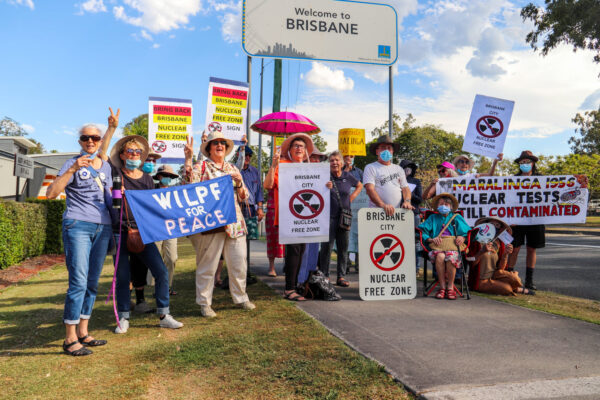 WILPF Qld members and other Brisbane peace groups held a footpath demonstration for Maralinga and to bring back the Brisbane Nuclear Free Zone Signs.

Sixty-five years ago, on the 27th of September 1956, British forces began the atomic bombing of the Anangu peoples and their land at Maralinga.

The following 2021 commemorative speech was given by Janette McLeod, WILPF Qld.

I would like to acknowledge the Aboriginal-owned Creative Spirits website for much of the information about Maralinga that I will now speak about.

Maralinga in South Australia is remote. In 1956 Australian and British servicemen built a test site and an airstrip about 488 kilometres north of Adelaide and the area became known as Section 400. It enabled Britain to achieve nuclear power status during the cold war.

Maralinga is part of what was known as the Woomera Rocket Range and Maralinga is a Yolngu name for thunder.

Between 1955 and 1963 the Australian government agreed to perform seven series of atomic tests, on Aboriginal land of the Anangu people. Many Anangu people were forcibly removed from their traditional lands in the lead-up to the tests.

The forced relocation destroyed the traditional lifestyle of the Aboriginal families. The damage was radiological, psycho-social and cultural. This change was profoundly negative and to this day, much of the work of lifting the living conditions of Aboriginal people results from the loss of traditional independence dating from the 1950s.

Survivors recall the fleeing Aboriginal people being picked up in trucks or forced on a long walk through the desert without water on routes to avoid exposure. In their memory, the “momentous” event is embedded right next to creation stories.

In 2014, Former Indigenous Affairs Minister Nigel Scullion said: “We thought we were the cleverest things going. How stupid we were. We didn’t think anyone owned the land.”

About 1,200 Aboriginal people were exposed to radiation during the testing. The radioactive fallout, called “puyu” (black mist) by Aboriginal people, caused sore eyes, skin rashes, diarrhoea, vomiting, fever and the early death of entire families. The explosion caused blindness. Long term illnesses such as cancer and lung disease were found in the 1980s, a time when some Elders grew restless and walked back into their country.

The Royal Commission into British Nuclear Testing in Australia found in 1985 that attempts to ensure the safety of Aboriginal people were riddled by “ignorance, incompetence and cynicism”.

The boundaries of the test fields were inadequately patrolled and the British dismissed concerns for Aboriginal people’s safety with the heartless comment that “a dying race couldn’t influence the defence of Western civilisation”.

The South Australian government granted the Maralinga people title to land around the site in 1984, but the federal government kept control of Section 400.

The test sites at Maralinga have never been adequately cleaned up. In 2011 Melbourne Age journalist Philip Dorling wrote that “more than a decade after the Howard government declared the clean-up of Maralinga to be finished, the Australian government is continuing to support remediation work at the former British nuclear weapons test site”.

FOI documents released in 2011 showed that the Australian government declined requests by Maralinga Tjarutja to clean up the trials site closest to the Maralinga Village. This trials site was used by British nuclear weapons scientists to conduct 262 trials that explosively dispersed 7.4 tonnes of uranium into the environment.

Nuclear engineer Alan Parkinson described that what was done [to clean up] at Maralinga as a cheap and nasty solution that “wouldn’t be adopted on white-fellas land”.

Australia has now moved closer into the nuclear arena with its proposed acquisition, for the first time, of nuclear-powered submarines under the AUKUS agreement between the United States, United Kingdom and Australia.

The AUKUS project carries three nuclear risks, according to Allan Behm of The Australia Institute:

The Aboriginal actress, Margaret Dingle, wrote three days ago, in the independent Adelaide news website InDaily, that what concerned her was that this momentous decision was announced without a debate or vote in Parliament and without public consultation.

It was a unilateral decision by the Prime Minister – just like the one Menzies made in 1954 when he agreed to the British request for a permanent site to test nuclear weapons and kept the Federal Cabinet in the dark.

Both the permanent nuclear contamination of the Anangu people’s land and the nuclear-powered submarines Australia will be purchasing clearly show the dangers of nuclear power, nuclear weapons and the whole nuclear cycle.

25/09/2021 – The speech to accompany the footpath demonstration was written by Rosemarie Severin; and edited, amended and spoken by Janette McLeod at the Maralinga Commemoration. The event was organised by the Women’s International League for Peace and Freedom with assistance from Just Peace Qld and Friends of the Earth (PACE), Brisbane.

Photos from the footpath demonstration for Maralinga and to bring back the Brisbane Nuclear Free Zone Signs:

L-R, from top: Janette McLeod with the demands of the rally; Special guest speaker: John
Campbell, former Labor Deputy Mayor, who was responsible for the introduction of this Council policy to make Brisbane a Nuclear Free Zone; the WILPF Qld Performers for Peace; activists with the WILPF banner; key messages; and John Campbell with long-time WILPF member Heather Williams who was also instrumental in encouraging the Brisbane City Council to adopt the policy.

Action you can do to support this footpath demonstration: