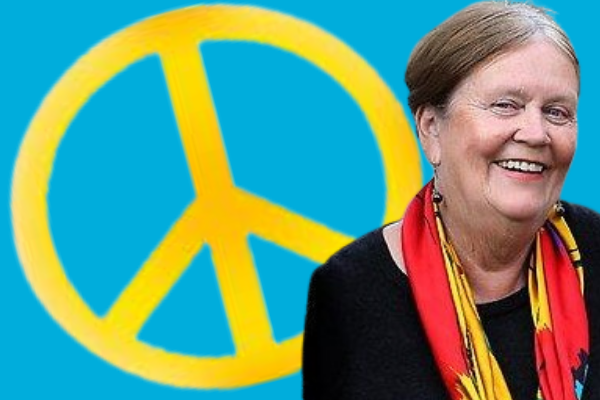 KIM NAPIER: Today marks UN International Day of Peace, and Australia’s leading women’s peace organisation is calling on the federal government to scrap its nuclear submarine policy. Margaret Reynolds happens to be the Tasmanian-based National President of the Australian Women’s International League for Peace and Freedom and joins us on the programme. Good afternoon, Margaret.

This has been playing out over the last five days with a lot of discussion, conversation, and heated debate around it. What has been your reaction to what’s played out with Australia’s shift to nuclear-powered submarines and the military pact with the US and UK?

Indeed, there was quite a movement in Hobart, as in the number of other capital cities around Australia. And I suppose that many of us had pushed it all to the back of our minds and thought, look, we do things differently these days.

So, yes, it was a shock announcement, a surprise announcement. And I think many, many young people, especially, will query, how can this happen without any discussion without it going to our Parliament, without it being discussed and widely debated in the community, because, after all, you know, it’s a decision that’s not going to affect me and my generation. It’s going to be a decision that very much impacts on young people. And there should be much wider debate with them and with the general community.

So you mentioned the seventies when I’m guessing it was the aircraft carriers that were coming down to Hobart because I remember them in the nineties coming into Hobart and then the Greenpeace protest happening. I think my mate, he went out next to one of them on a wind surfer. Can you imagine that next to one of those huge American aircraft carriers? Insane. So, you’re right. We kind of did away with those. Is there an irony around this decision or plan to nuclearize our Navy on the International Day of Peace?

Well, I’m afraid I’m not confident that either the Prime Minister or the Minister for Defence, Peter Dutton have much awareness or interest in the United Nations International Days and specifically International Day of Peace. But, yes for many of us, there is a very sad irony. And I just think it needs it needs much more thought.

I mean, there are so many implications, there are environmental implications, there are cost implications, there are relations with our neighbours, implications. And that’s just my and my members’ immediate reaction around the community. So many people are talking about this and saying, look, if it’s in the national interest, which is what the Prime Minister has said, why isn’t the nation being taken into the confidence of the government, and it being widely discussed, so we know the detail. We know no detail, really, except what we’ve been told in the last few days. And this is a major decision that is going to impact on so many Australians in their families in the future.

Well, if you could project what does the pact mean.

Well, it locks Australia into another, however many years – 40, 50, 60, who knows how many years of relying on older ties like the United States and Britain? I would have thought that many young people who are more questioning of our history and enthusiasm for going to war in other countries would be querying this and saying, look, this is a new era.

Isn’t the time we learned conflict resolution, how we learn to negotiate away differences? War has never solved anything. We know this just from our recent experience of a 20-year war with Afghanistan. And look at what is happening to the people in Afghanistan now. So, there’s an irony too that just after we hear the circumstances of the people of Afghanistan – and I’ve seen those images of so many trying to flee the country. Here we go again, challenging finding another enemy.

What is wrong with us? We seem to need an enemy. There are enough enemies for society to deal with. I mean, COVID is the immediate one. Racism is another one. Climate change is another one. We don’t need to find a country to be at war with.

You speak wisely, Margaret Reynolds, the Tasmanian-based President of the Women’s International League of Peace and Freedom [Australia]. Do you think that decision was made or that pact was formed, so clandestine because they didn’t want the attention of protesters or young Australians questioning why this was happening?

Look, I think it was a strategic decision to deflect the Morrison government from many of the issues it hasn’t been dealing with. Climate change for example, the Glasgow conference in the next few weeks that should be demanding the government’s attention. Is Australia going to remain isolated from so many countries because of its policies of not being prepared to take on emissions? So, I think its part distraction. It’s partly just an old way of thinking. Surely we’ve had enough experience. Certainly, my generation has had enough experience of living through a war. Yes, not on home soil. And there’s another angle we should consider in terms of Indigenous ownership of the land. But we’ve seen so many wars. We’ve got people in our community right now suffering from the trauma of their service in Afghanistan and Iraq. And it really is an old way of dealing with international relations. And it’s time we had a government that was prepared to look at examples like New Zealand, like a number of European countries that say, look, we have to find other ways of resolving conflict.

Final question, would you have preferred the deal with French shipbuilder Naval Group to build the advanced conventionally powered attack submarines over this one?

So, you’re not happy either way.

I’m hard to please aren’t I.

I accept that there were problems with that deal, and I oppose the huge amount of Australian dollars going into militarisation because Peter Dutton and others say, oh, we’ve got to defend ourselves. Well, we only have to defend ourselves if we have an enemy that we consistently berate, as we do currently with China. We’ve got to learn and let live and exercise national interests in other ways. Other countries have done it. It’s time Australia learned to do it.

Margaret Reynolds thank you so much for finding time to be on ABC Northern Tasmania Drive this afternoon.

Thanks very much, Kim