Women, Peace and Security and the End of the Korean War – what are the lessons? 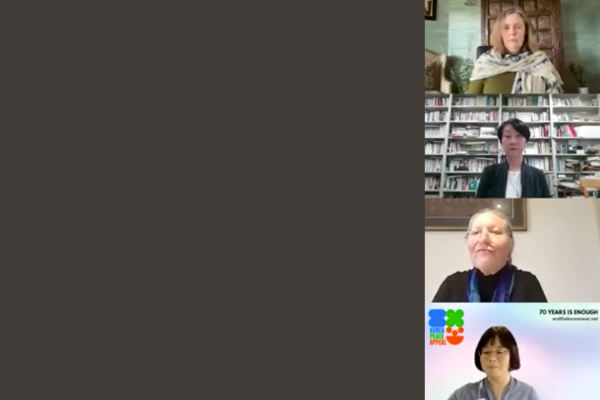 On the Korean peninsula, women activists, religious groups, domestic and international civil society organisations have been working together for reconciliation for over seven decades to bring about the end of the Korean War.
While the guns may have ceased firing 68 years ago, the “war” continues, and today the Korean peninsula continues to be affected by militarisation and the constant threat of nuclear action.

What are the lessons?

Held on Tuesday, 12 October 2021, this ANU Gender Institute WPS 2021 webinar examines the women-led and civil society movements that have been organised across the generations and across the globe in support of a peaceful final conclusion to the Korean war. Panelists examine the lessons which can be learned from the implementation of the women, peace and security agenda to enable meaningful engagement of women in peace processes, and the implications of the process of moving towards a peace agreement for the Korean peninsula, Northeast Asia region and globally.

Professor Kozue Akabayashi
is professor of feminist peace research at Graduate School of Global Studies, Doshisha University in Kyoto, Japan. Her areas of research interest and activism are feminist analysis of militarism, demilitarization and decolonization of security, and feminist critical methodology and pedagogy.
Kozue has conducted action research on Okinawa Women Act Against Military Violence, a feminist peace movement in Okinawa, Japan where US military has been stationed since the end of WWII.
Her research analyzed the process of theorizing historical experiences of women in Okinawa, namely the history of sexual violence under the long-term military stationing as a structural problem of the military and militarized state security.
Kozue has also been active in global feminist peace movements and was International President of Women’s International League for Peace and Freedom (WILPF) from 2015-2018, during which time she joined Women Cross DMZ, a feminist peace action that crossed the DMZ from Democratic People’s Republic of Korea to Republic of Korea, calling for peace on the Korean peninsula. Her recent publications include: “Cold War Shadows of Japan’s Imperial Legacies for Women in East Asia” in Positions, Vol.28 (3), Aug. 2020 in Perspectives on Peace and Security in a Changing Northeast Asia: Voices from Civil Society and the Ulaanbaatar Process, 2019).
YouKyoung Ko
is a consultant for the Women’s International League for Peace and Freedom (WILPF) and the women-led Korea Peace Now! Campaign launched in 2019 to end the Korean war with a peace agreement. She is a standing committee member of the Korea Peace Appeal Campaign launched in 2020. She is an expert on impacts of US-ROK alliance and US military presence in South Korea.
She served as an executive director of the National Campaign for Eradication of Crimes by US Troops in Korea. She is a steering committee member for the Korean Peace Network Against Military Bases and an advisor for the Pyeongtaek Peace Center.
The webinar is facilitated by Honorary Associate Professor Ludmilla Kwitko, WPS Webinar Series Co-ordinator
This webinar is the second in the ANU Gender Institute Women, Peace and Security 2021 Webinar Series.
Click here to view this webinar

The Women, Peace and Security (WPS) webinars examine the implementation of the WPS agenda at the local, national and global contexts. It has been more than 20 years since the adoption of UN Security Resolution 1325 (in 2000) yet the progress towards the goal of peace, human rights and security, gender equality and gender justice has at best been slow. This series provides a forum to hear diverse voices and perspectives – academic, civil society, government, peace builders and women human rights defenders – and to critically examine these complex challenges, with a goal of promoting the meaningful participation of women, in all their diversity, in all aspects of peace and security.
LINKS: